So we move back to the caravan after a short stay on Tanera in a real house! But the caravan has no sewage hooked up so we now have the opportunity to install a composting toilet. I’ve got some friends who have very simple waterless loos, one has a bucket in a shed with a loo seat over it and another has 2 buckets in the house, one for solids and one for liquids. Both these work for them but wasn’t what we thought we wanted. We certainly didn’t want to have to go outside for a dump. So we went online to see what was out there. There was one that seemed to be the bees knees in waterless loos, a self contained composter toilet. So everything goes in it and gets composted inside the loo and then you simply open a draw up and remove ready made compost. Great, yet at 2k for this it’s a lot of money. The company didn’t have any in stock so that put a quick end to that one. Still confused about what to get we did a search on eBay and found a bio less composting toilet going for a lot less than two grand. And it didn’t separate the wees and poos at source but rather later on in the process so boys can stand to wee, hurray! A last second bid secured the toilet and it arrived a few days later. Lesson one, don’t bother buying a used toilet from eBay! It stunk. But it was all we had so we hurriedly ripped out the old flushing toilet and installed the new one. It looked like a normal toilet but maybe a little bigger. For the first 2 weeks it worked fine. There was a bucket inside it to collect everything, the bucket had holes in the bottom to allow liquid to drain out. The liquid went through the bucket and onto a slated tray and then ran down to a collection hole at the back which had a pipe connected and ran outside. We used 2 computer fans for the venting fitted inside some cooker hood pipe which attached to the back of the loo and out the window.

Then disaster strikes the toilet starts to smell, really smell. We lift up the bucket to discover the piss hasn’t being going out the pipe but rather stagnating in the bottom of the toilet. Not a nice thing to have to clear up. I tried lots of different ideas to try and make the wee go down the pipe, most of which involved an awful lot of silicon, but nothing worked.

Time to do what we should have done and KISS the toilet. Keep It Simple Stupid.

Back online we go! And found the Kildwick simple build it yourself composting toilet parts. This consisted of an adapted toilet seat, I will explain how later. A separator, a funnel for the separator to fit into and a good old fashioned bucket, this time with no holes in the bottom!

I used some old pallet wood and bits of osb board to construct the toilet I made it too high the first time around so had to dismantle it and lower the legs. It took most of the day as I had no plans to work from but after lots of swearing I got there. The lid lifts up so you can remove the bucket, the wee goes down a pipe and outside. 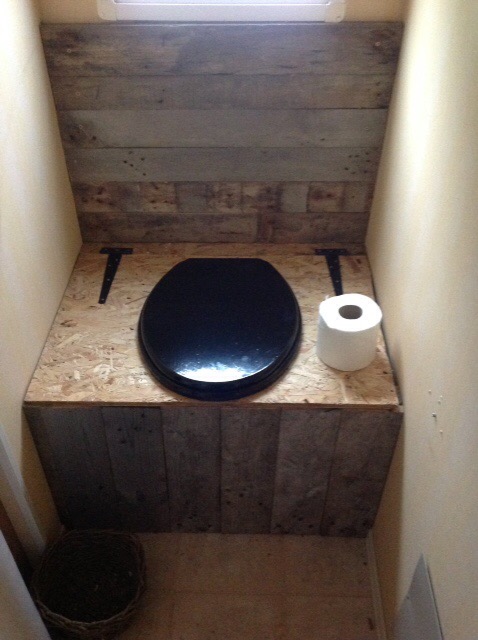 I kept it as small as I could due to the room being so small which meant there was no room for a vent pipe, but after a month of use it doesn’t smell at all. We have to empty the bucket approximately once a week. It all goes out into the hot composter, along with our food waste and also dog poo. The composter seems to be working ok. It will need a bit more time to tell.