Picking up where I finished last time, just off the Glen Leraig path, I decided to tackle the section overlooking Loch Assynt.
Sun shining; a lovely day!

I used the opposite end of the footpath to get up there, and got a couple of great views on the way. 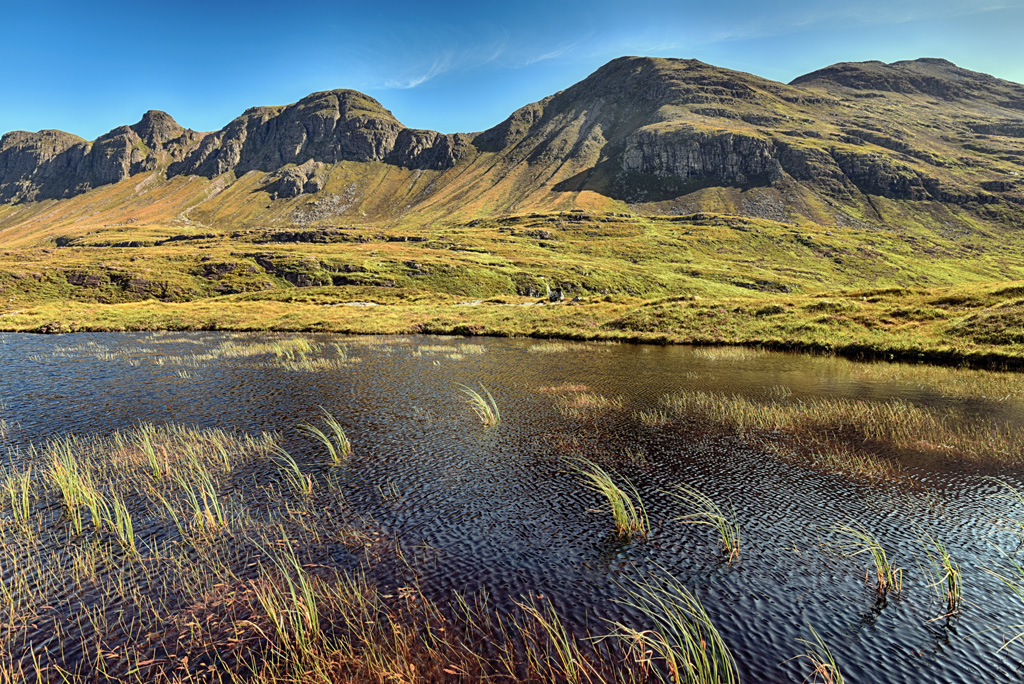 Arriving at 305m/ 1000ft, I stopped for coffee near to a small cairn that had clearly been there a while, according to the lichen and moss growing on it. A lizard shot past, too quick for me. 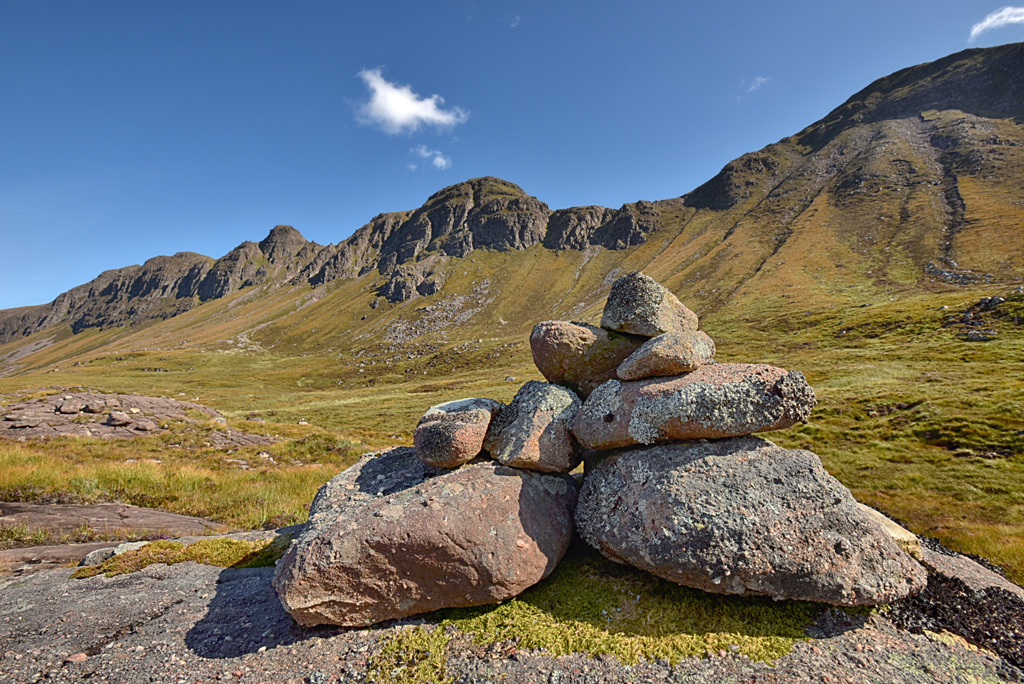 I’m walking on a grassy terrace, and it’s pretty easy going most of the time. Not even close to the main crags and buttresses. There are a couple of burns and small waterfalls. Some of the burns I hear but don’t see; they’re running just below the surface in gullies. 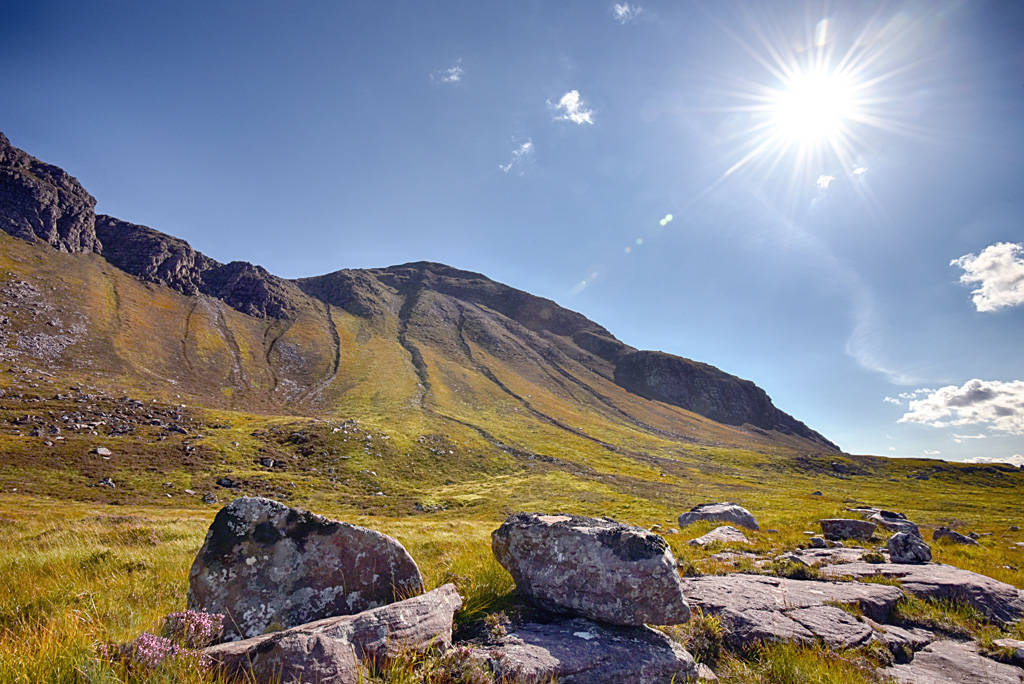 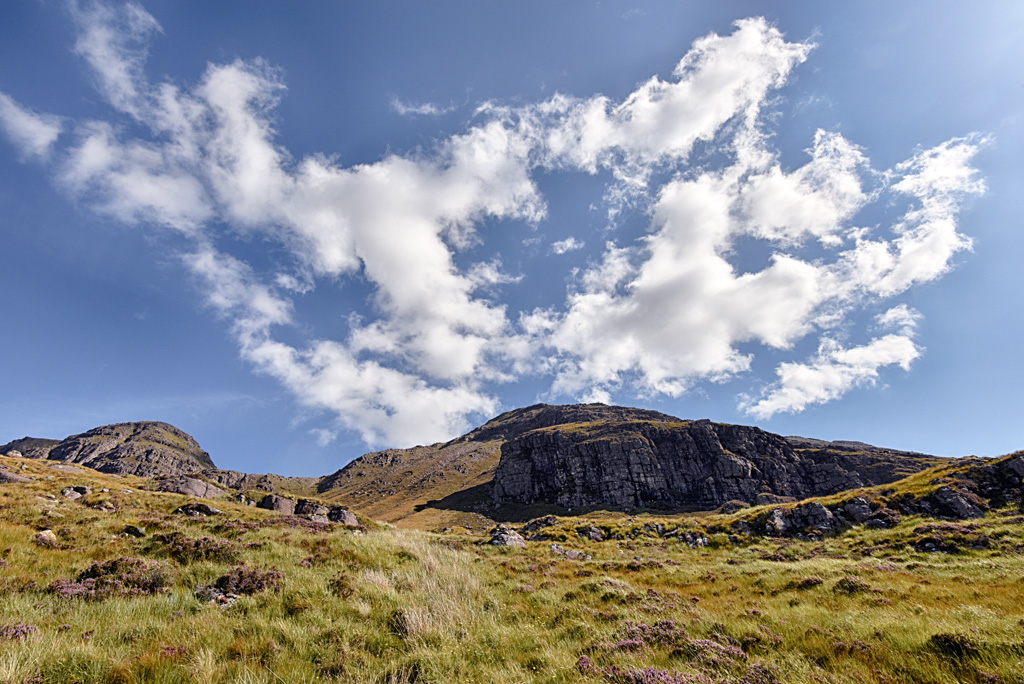 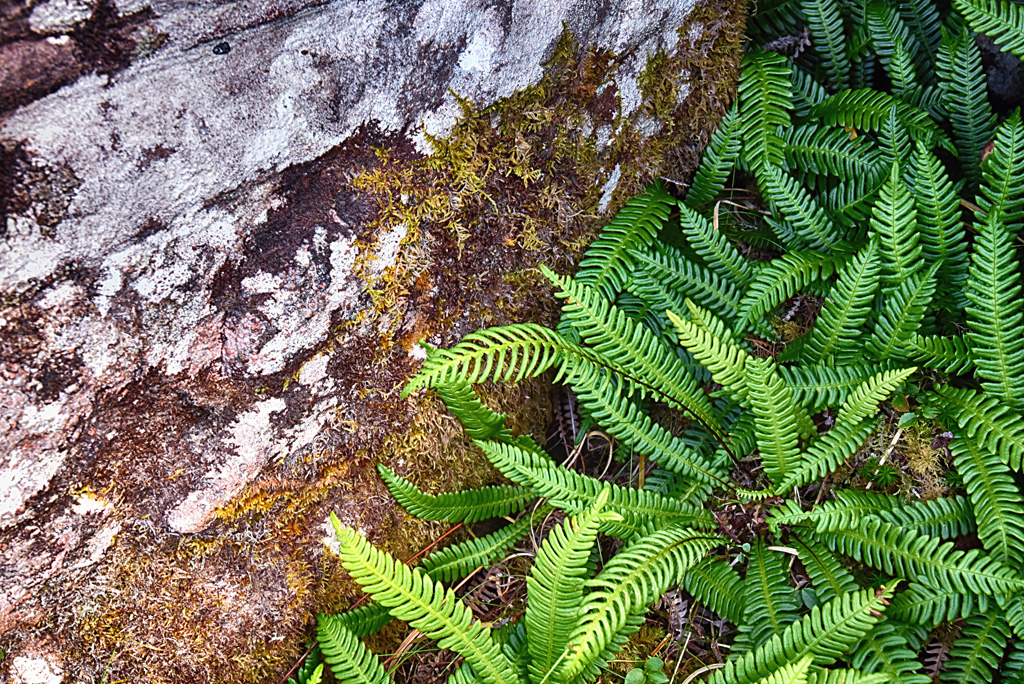 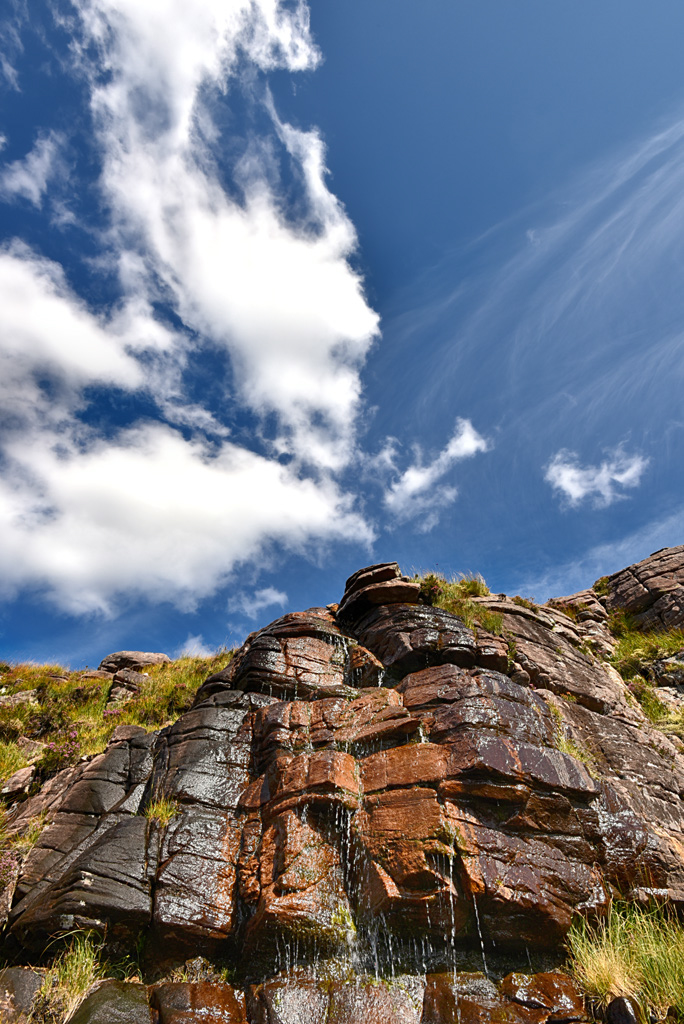 I don’t see a single person after I leave the road, not even on the top. At one point I think I hear voices, so I stop and listen, but it’s running water deceiving me. I was on Suilven yesterday; it was much busier than this!
Part of this walk involves some negotiation or compromise at Creag Mhor; my contour goes straight through a section that looks like a steep cliff on the map. Don says I’m going to need wings or hooves. Actually neither…. I’ve been following a deer path for a while, and as I get to the tricky bit, the path gains about 100 feet onto a grassy plateau above the crag. No problem, thanks to someone else’s hooves! 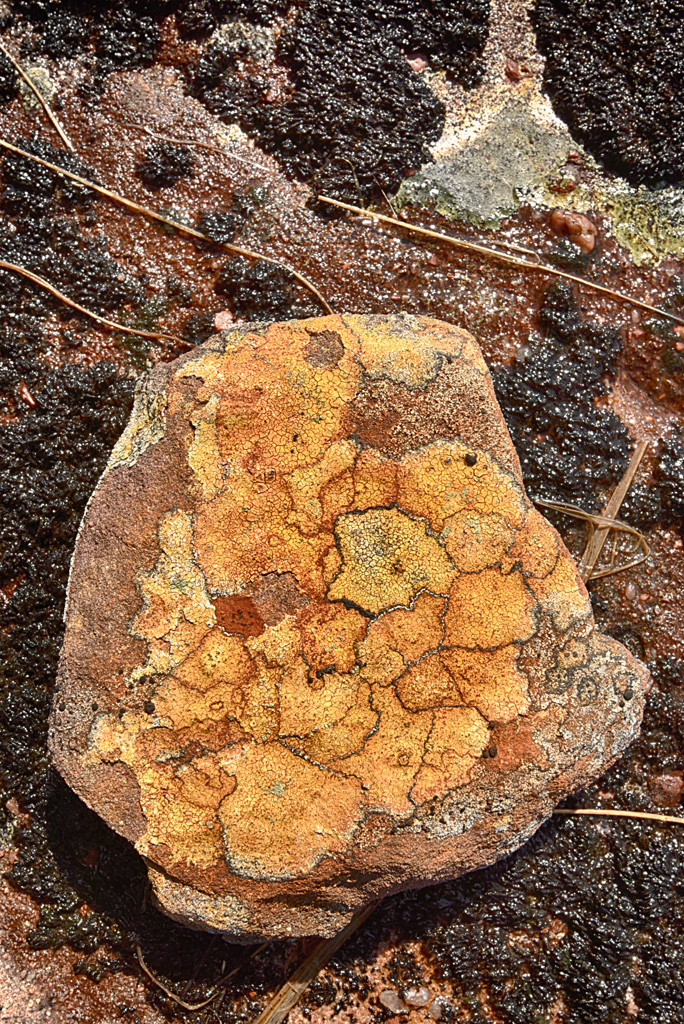 Lunch is up there, on a flat rock, next to one of a number of erratics sat perched looking at the same view as myself. Loch Assynt below and Conival, Canisp and Suilven in the distance. Behind me, the peak of Spidean Coinich is visible most of the time, but its not that close or imposing. My chosen lens for the day is wide-angle, so it looks even smaller. 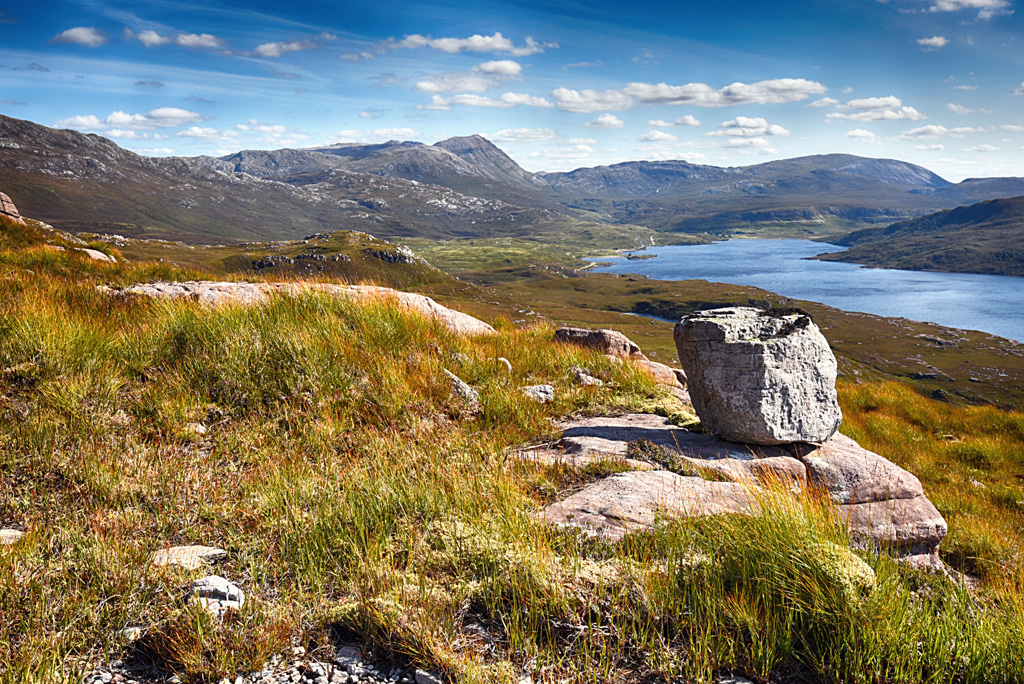 Just past my lunch spot, I find quite a big bone on a rock, so I speculate that an eagle might have had a “table for one” and dined on venison. It must’ve had a similar view to me with my cheese sandwich! 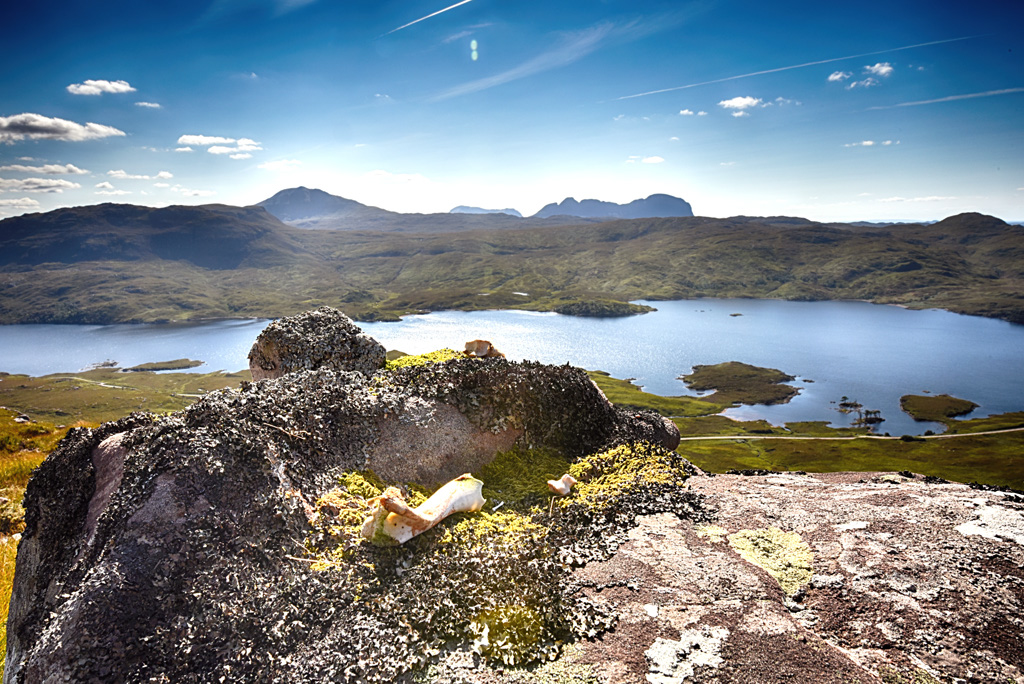 Heading east, I’m conscious that the Cambrian Quartz of the Spidean is getting closer to the sandstone that I’m walking on, and wonder where the two meet and what it looks like. The rock strata are at entirely different angles.
Suddenly, I’m on the new rock, standing next to a juniper, and it’s time to descend. Below me are two lochs, Loch a Choire Riabhaich and Lochan an Duibhe. I had intended to walk between them on my journey back to the van, but it was well soggy, so I skirted both and followed the burn. 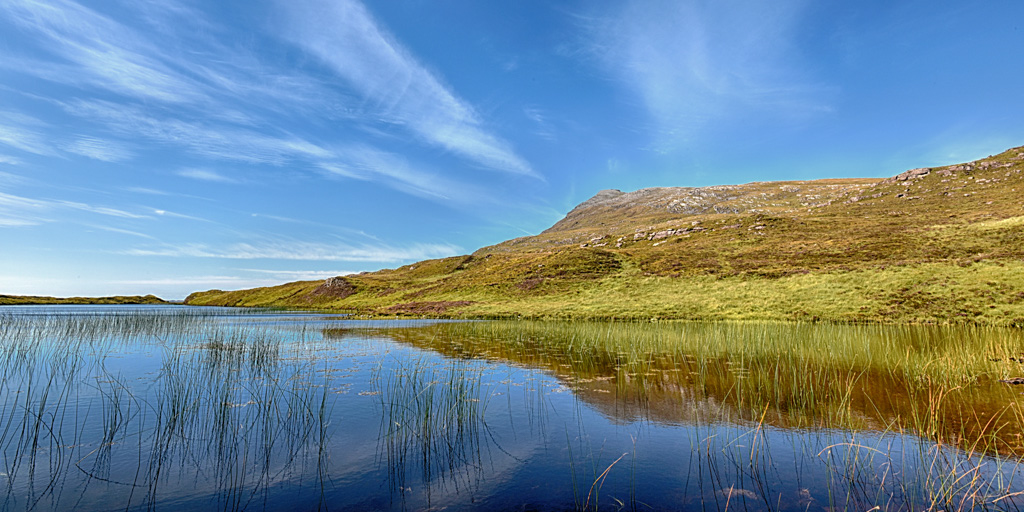